So, on my bike trip to Ireland, Inishbofin was one of my spots to go. You take a boat out of this tiny dock.  I spent my time here hiking out to the fort, instead of the popular bike trail all the other ferriers were doing. The fort cuts off from the mainland at certain tides, so not many were willing to risk it.  I figured, if I had to sleep out there, I would have been safe, and it was warm, and it felt like it never got dark there. I had food, so I was going to hike out.  If I had had my clay, I would have been rolling it on everything. It was a literal texture-lover’s dream.   The doors and windows were amazing, the little plants I could have cast in clay, the stone markings… Oh my gosh.  If I ever went again, I would be packing mold supplies instead of clothes.   And more Brie and Figs.

The other thing I wanted to mention about this little Island, was the gift store/Museum that is there. I happened to find a little pencil drawing that the owner did, that I really resonated with while on this trip.  I felt like the picture was of me.  It cost one dollar.  I brought it home and laminated it. It was called Talking to God.  I recently friended the artist on Facebook, and it felt like Christmas.  Amazing how a trip can change you like that.

Ireland travelers with a love for the off-the-beaten path tips, go hike out to this, and at least bring polymer clay to capture something ancient to keep alive. Read more …

Inishbofin (derived from the Irish Inis Bó Finne meaning ‘Island of the White Cow’) is a small island off the coast of Connemara, County Galway, Ireland.Inishbofin has around 160 inhabitants and is a popular tourist destination.

The island’s English name Inishbofin is derived from the Irish name Inis Bó Finne (‘Island of the White Cow’). There are several legends concerning the origins of the island’s name.[1] According to one legend, the island was actually a floating, insubstantial place until some fishermen landed on it in a fog. By bringing fire onto the island, they dispelled the magic, fixing it in place. They then saw an old woman driving a white cow, which turned into a rock when the woman struck it with a stick.[2]:23[1]

The Irish name has also been anglicised as ‘Innisboffin’ and ‘Boffin’ or ‘Bophin’ island.[3] Inishbofin lies around 8 kilometers (5.0 mi) off the Connemara coast opposite of Ballinakill Harbour and Cleggan Bay. It is separated by a narrow channel from Inishark (Sark island)[3]. It is about 5.5 km (3½ mi) long and 3 km (1.9 mi) wide. The highest point is in the Westquarter and rises to 292 feet.[4]

Much of the island is a Special Area of Conservation (due to the presence of corn crakes and seals).[5] An aspect of the island is that it has no trees or forests whatsoever. Any wood was cut down and used as heating fuel. Because of the salt-enriched air, trees were never able to re-establish themselves.

It is not known when Inishbofin was first settled. There is no evidence of a Mesolithic, and only circumstancial evidence of a significant Neolithic presence.[6] Although there are pre-historic field systems, their age has not been definitely established[2]:25 and could be anywhere between Bronze Age and early Medieval.[7] Neolithic and Bronze Age monuments, found in significant numbers on the Connemara mainland, are conspicuous by their absence.[6] Definite traces of human settlement are available only from the Iron Age onwards, such as the remains of promontory ring forts like ‘Dun Mor’.[7]

If you enjoyed this post, please consider leaving a comment or subscribing to the RSS feed to have future articles delivered to your feed reader. 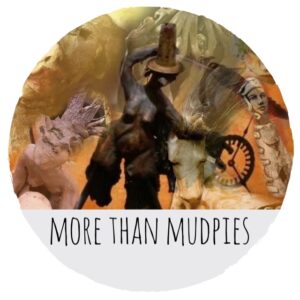 Walking with the Sheep – An Ireland Entry

There’s something to be said for a good dream to make you feel great. And a good rest. I was still f [...]

The Most famous prehistoric fort of the Aran islands is situated in Árainn at the edge of a cliff ap [...]

I’m sitting here watching Yo Gabba Gabba with my granddaughter Serenity. She loves this show. I have [...]

Get Your Arse On the Bus! ~ an Ireland Entry …

I was probably day 5 into this trip when the muscle soreness I was experiencing was becoming pretty [...]

Things are not always as they seem ~ an Ireland Entry

I rode over on a blue and white boat named “The Happy Hooker” to the largest island, Inishmore in th [...]

The Labyrinth ~ An Ireland Entry

On one early evening, on the island Inishmore, I went searching for an old castle. It was uphill the [...]

prepare to meet your inner child